The luxury men’s and women’s swimwear brand is celebrating with the launch of its 50th-anniversary collection, a limited-edition men’s swimwear a**ortment consisting of 50 prints, each one representing a different year, starting with 1971, the year the Vilebrequin was founded.

“It’s a homage to the history of the brand,” Roland Herlory, chief executive officer of Vilebrequin, told WWD. “The idea is to find the thing that symbolizes each year the best. So each bathing suit has a meaning. My dream is that people will buy the year — not the print, not the color combinations — but the year. You know, you’re going to buy the year you were born. Or, the year you get your first job. Or, the year you met your husband or wife, your honeymoon, your wedding. I don’t know. But, I love this idea of attaching to a product a year and all the souvenirs matching with this year. It’s another way to buy. You buy a part of your memory.”

The first print, “1971,” launched in March with red, white and blue-striped men’s swim trucks nostalgic of the era. The 1980s prints will start rolling out April 16, followed by the 1990s and 2000s in May, with more recent years launching sometime in the summer or fall. 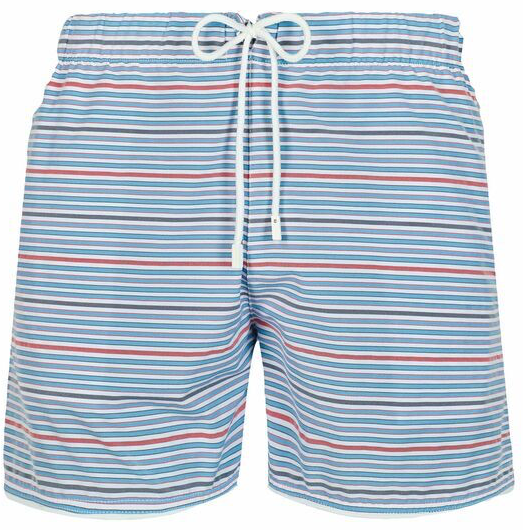 Select prints from the 50th-anniversary collection can be found in other products categories, such as women’s and children’s swimwear, ready-to-wear and accessories. But Herlory said Vilebrequin’s focus will always be in the men’s division.

“The origin of the brand is masculine; it’s about men,” the CEO said. “If you want to grow, you need to grow in respect of your roots and with your origin. Otherwise, you’ll lose your soul and you’ll lose your deep values. For me, it’s always been very clear that the main business of Vilebrequin has been the men’s bathing suits.

“That does not prevent us from planting the seeds of diversification, as long as we take time to do things well, and as long as it is coherent and consistent with our absolute DNA of the men’s swimwear,” Herlory said. “Then you can extend to the art of living at the beach. And we’re developing ready-to-wear. But to integrate these new values it takes time and we’re going at our own speed.”

That speed spans half a century. Vilebrequin was founded in 1971 in Saint-Tropez, France by Fred Prysquel. “But it started, not as a business, but because of a love story,” Herlory said.

Prysquel, a photographer and journalist, was in Saint-Tropez in the early 1970s. Spending most days on the beach — and not feeling comfortable in the Speedo-like men’s swimwear of the time — Prysquel decided to make his own in an attempt to court the object of his affection (and future wife) Yvette.

“He was successful, because they married; they spent their whole lives together,” Herlory said. “It was the first swim shorts of modern time to seduce a woman.”

What he created was his own version of the board shorts he saw while in California and parts of Africa. It wasn’t long before others started asking Prysquel where he bought his swimwear and if he could make one for them. Yvette, a fashion designer, had her own boutique and began selling some of Prysquel’s designs out of it. Five decades later the Vilebrequin love story continues.

In 2012, G-lll Apparel Group purchased Vilebrequin. The following year, women’s swimwear was added to the mix. Today, the quinquagenarian swimwear brand sells to 60 countries around the world. The U.S. is the biggest market, followed by France and Italy. It also has 190 stores, a mix of company-owned and franchise locations, many of them in major beach destinations, such as Saint-Tropez, Honolulu, Hawaii, Capri, Italy and Cancun, Mexico.

The men’s 50th-anniversary collection can be purchased in select Vilebrequin stores and on vilebrequin.com, as well as third-party retailers, including Saks Fifth Avenue, Neiman Marcus, Bloomingdale’s, Bergdorf Goodman, hotel boutiques and Galeries Lafayette in Europe. Prices range from $135 to $780 and come in men’s sizes XS to x**L.

The collection also incorporates sustainable fabrics, 62 percent to be exact. But Herlory pointed out that most of Vilebrequin’s a**ortment is made from at least 60 percent sustainable fabrics, such as recycled plastic bottles. He’s hoping that number will be closer to 90 or 100 percent within the next four to five years. That includes not just using eco-friendly fabrics, but also implementing sustainable production processes globally.

Meanwhile, despite the challenges of the last year — and lack of travel — Herlory said he’s optimistic for the future.

“We had very contrasting results [throughout the pandemic],” he explained. “All of the very touristic destinations suffered a lot. But, the local destinations had unbelievable results, because people could not travel. So they stayed home and the stores with local clients, they doubled their sales.”

“What I know from experience is that when you exit a crisis, the very best brands, or the ones that are most popular in a territory, are the ones that are the most reinforced, because the market has been cleaned, and because people go back to the essentials,” Herlory said. “The absolute DNA of Vilebrequin is to be able to combine extreme fantasy and elegance. The recipe, the secret of the brand, has been to be able to combine these two values in order to create one style. Luxury has this ability to [convey] values. And the luxury client of tomorrow, he will buy values; he will buy sustainable. He will buy durability. He will buy quality. He will buy beauty. It will be the main trend in the coming years: Not to spend, but to invest. That’s a different way of consuming. It’s not only getting the product, but it’s getting the experience. And luxury is clearly moving in that direction.

“So for me, the future is bright,” Herlory said. “Fifty years old is a good age. It’s an a**et. Experience of life and expertise, you get it through the years.”